Town with a gingerbread scent 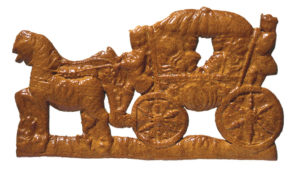 The delicious Toruń gingerbread has been famous for centuries. Those spicy cookies in various shapes and varieties have been baked in Toruń since the 14th century. The gingerbread industry flourished thanks to the plentiful local supply of good flour and honey, and the town’s location on the European trade routes, giving access to exotic spices. At its peak, the gingerbread craft occupied a few dozen bakers, confectioners, and local monasteries.

More and more intricate and sophisticated shapes were developed: gingerbread animals, historical figures, carriages and geometric shapes. The most famous are, however, the chocolate-covered, small ‘katarzynki’. According to one legend, they were invented by a baker, so filled with unrequited love for a beautiful Toruń girl called Katarzyna, that his tears dripping onto three heart-shaped gingerbread pieces joined them into one biscuit.

Approximately 700 gingerbread moulds are known nowadays, some of them displayed at the ‘World of Toruń Gingerbread’ (‘Świat toruńskiego piernika’) exhibition in the Copernicus House (Dom Kopernika) basement.

There is even a living Gingerbread Museum (Muzeum Piernika), where everyone can try their hand at gingerbread making. Under a watchful eye of a medieval Master of the craft, you will knead the dough, cut the shapes and bake the gingerbread yourself.